COVID-19 Vaccination. Listen to what the scientists and doctors are saying, not influencers and singers. Here is a post to combat some misinformation.

There is a lot of misinformation and concern around the vaccine. Especially in the Lebanese society where misinformation tends to take root quickly, as people believe what they hear even when it's second, third, fourth...hand knowledge with no particular science backing it up. Of course this is not an issue that Lebanese suffer from alone, but unlike other countries were the governments actively try to combat misinformation our does not, if anything the media has been feeding into it. So, today this article aims to provide information, debunk certain misinformation, and provide insight on the validity or invalidity of certain concerns around the vaccine.

I would like to start by establishing my credibility, I am a published scientific author in the realms of Human Behavior, Engineering, Public Policy, and Public Health. Additionally, I published a paper that tackles COVID-19 lockdowns and how they should be applied while a vaccine is being developed/deployed. I have closely monitored the production and approval of the vaccine. My aim is not to support one vaccine over the other, I am not paid by any of the vaccine companies and stand to make no monetary benefit. However, I want to advocate for vaccination as a whole.

Information about the vaccines:

Valid and Invalid Concerns about the virus:

In the end there are a lot more things to tackle and discuss, I cannot begin to even cover all of it in this post, but please if you have questions. I will continue to provide answers on this post, indefinitely.

Let's combat misinformation and get vaccinated together.

*Pfizer currently has a emergency use authorization (EUA). A direct quote from the FDA is "The EUA process is different than an FDA approval or clearance. Under an EUA, in an emergency, the FDA makes a product available to the public based on the best available evidence, without waiting for all the evidence that would be needed for FDA approval or clearance." - that is to say that, yes they do not have full FDA approval. However, per the update revision of the authorization, FDA has made it clear that there is strong evidence that the vaccine is effective and would receive full FDA approval.

Popular posts from this blog

January 24, 2021
Note: Transferwise changed its name to Wise . It's exactly the same thing, just a re-brand . What is Transferwise? Transferwise is an online banking service. It has no physical branches, but it can do most of the things a bank can. It's headquarters are in the EU. It's subject to the EU's laws.  Can Lebanese passport holders use Transferwise? Unlike most of other services, Transferwise verifies Lebanese passport holders, so you can still use it! Transferwise allows people with Lebanese passport to sign up and open an account and use it, you can open an account with your passport information (name, date of birth..etc) and use your address in Lebanon and phone number in Lebanon, and it would work, BUT they will limit some of functionalities because you live outside the EU. For example, you can't request a debit card or use a USD account. You can bypass this by using a business account (more on this later). What happens when you sign up? When you open a Transferwise ac
Read more 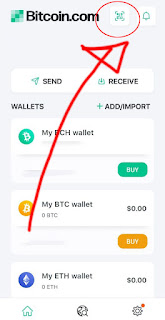 What is Bitcoin Cash (BCH)? Bitcoin cash is a cryptocurrency created in August 2017, from a fork of Bitcoin. Despite their philosophical differences, Bitcoin Cash and Bitcoin share several technical similarities. They use the same consensus mechanism. More reading: https://www.investopedia.com/terms/b/bitcoin-cash.asp How can I claim BCH from a QR Code? Download https://wallet.bitcoin.com/ Set it up Click on the QR code scanner in the top right corner  How can I get USD with my BCH or crypto? For people living in Lebanon: The easiest way is to sell your crypto for USD using peer to peer groups. People usually prefer to buy and sell the stable coin USDT so we'll have to exchange our crypto to USDT before starting the sale. Sign up on Binance Withdraw your money from Bitcoin.com wallet to Binance Exchange your BCH to USDT Sell your USDT peer to peer using LebBTCmarket.com or Localbitcoins.com Join our communities: Reddit:  https://www.reddit.com/r/lebanon/ Discord: https://discord.r
Read more

How can a Lebanese open a bank account abroad

January 22, 2021
EDIT: Lebanese can open accounts on Transferwise, which gives them access to USA/UK/EU and other banking accounts, all without needing to travel at all. It's a great service, used and trusted by many. It's based in the EU and has a good reputation for being save and having low fees. For more information  check this guide  Hello, I hope everyone is doing fine in this shitty economical situation Lebanon is passing through. In an attempt to help people brainstorm and figure out the best thing for them to do, I'm going to post a couple of threads tackling some of the financial issues related to Lebanon. This post is targeted to people who already have a lot of cash and aren't knowing what to do with it, it doesn't tackle how to get your money out of the bank.  A lot of people either have high-cash generating businesses, or where able to withdraw a large sum of money early on and are stacking their cash in vaults at home. Furthermore, with the new bank restr
Read more